I wrote my Tuesday goals and set my alarm for an early morning workout. I knew I would be working until 8pm and wouldn’t have time to get a workout in at night so I found the ‘No Excuses Workout‘ on Pinterest which combined cardio, body weight exercises, and core work. It took 25 minutes and definitely had me sweating!

I drank my Meta-D and made a Tone It Up protein pancake. I used a small banana and added some chia seeds. I topped my pancake with almond butter and strawberries. For some reason before I left, I also added some syrup and immediately regretted it because it meant I had already ruined my chances of having a whole day of clean eats.

I was hungry pretty early, and eventually had an apple while waiting for lunchtime.  Lunch was leftover steak and broccoli topped with avocado.  I hate that failures are becoming routine, but I went to the stash of jelly beans and took a handful.  Sadly, the sugar left me feeling tired and my willpower was low so I went back later for a second handful.  This didn’t help cure my hunger, but made me want to eat everything I could get my hands on.  After school I had a KIND bar – I highly recommend the Dark Chocolate Cinnamon Pecan flavor! 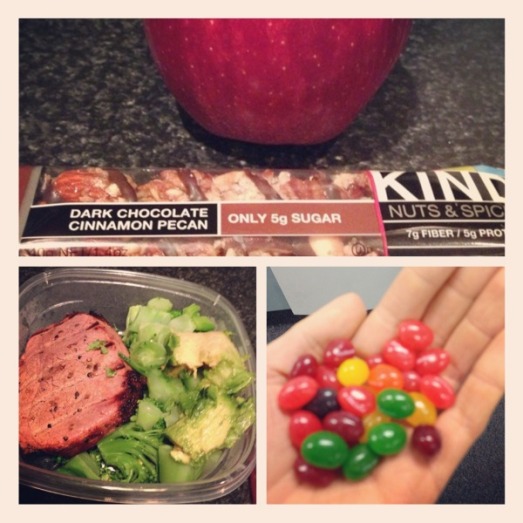 I had two extra hours of work followed by a school fundraiser at Chick-Fil-A.  I think I found the healthiest option: a Chargrilled Chicken Salad with extra sunflower seeds with half a package of Berry Vinaigrette, a side of fruit, and a water.  It was actually delicious and more food than it looked like!  I had a few raisins once we got home, but no sweets.

Musings of Medicine and Muscles by Julie Foucher

A girls journey through life...featuring the basics: love, food and fitness

Bess Be Fit
Meals and Miles