I become a Mrs!! That means I have 8 weeks to get the remaining 130 miles for my 220 until wedding challenge. That’s probably not very reasonable, so I may need to adjust my goal to cover a total of 200 miles. In the remaining 8 weeks, I would need to travel 13.75 miles a week to hit 200 by June 22nd. I’ve been averaging 10 miles per week which means I need to find a way to get in a few more miles into my weekly routine.

I spent this morning doing a yoga sequence to stretch out my muscles after a lot of intense Crossfit workouts this weekend. I did some downward dog, high lunge, triangle pose, forward bend, warrior, and a few others. It felt good! I started my morning with Meta-D and a TIU Protein Pancake topped with strawberries and almond butter. 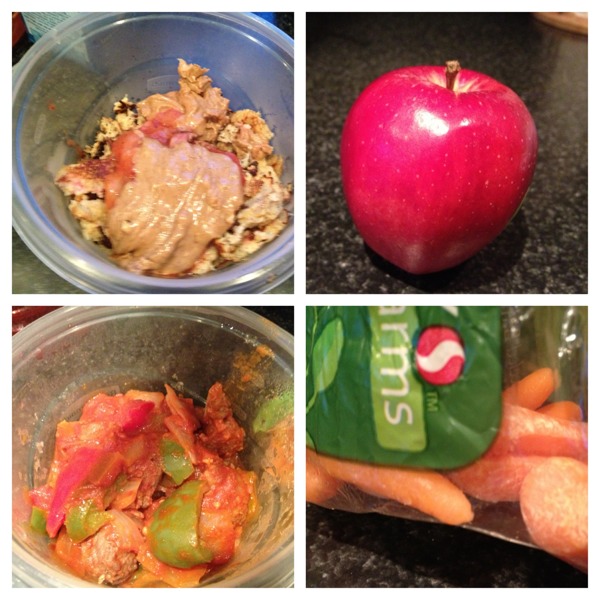 I was feeling hungry and had an apple for my morning snack. Lunch was leftover sausage/onions/peppers with a side of carrots and I grabbed a Larabar for an afternoon snack.  I saw the Blueberry Muffin flavor at Target over the weekend and bought two boxes since they are cheaper than at the grocery store.  Unfortunately, I’m rather unimpressed with this one.  The flavor reminds me of the Cashew Cookie and isn’t nearly as ‘blueberry’ as I had hoped.  I think that it may actually have less sugar than the Cherry Pie flavor and maybe that’s what I’m missing.  Note: this would be a good thing.

I got home with the intent to run, but started opening the mail.  I broke out an old (and bad) habit that I call the ‘stand and snack.’  I opened the jar of almonds and the box of raisins and just had one bit after another after another.  I finally called it quits after eating who knows how many and went out for a jog.

My intent was to run 3 miles at a steady pace, but after about 15 minutes I noticed I was literally putzing along without any effort.  I decided I needed to kick it into a higher gear and actually work on my run.  I ended up with negative splits (9:50, 9:20, 8:50) and was thrilled to finish 3 miles in 28 minutes.  I walked the last few tenths home.

We had a meeting with the pastor to talk about our pre-wedding questionnaires and although we had dinner planned, we were both feeling hungry and lazy after the meeting so we made a stop at Panera.  I ordered the Cobb Chicken Salad with Avocado (no gorgonzola) with an apple on the side.  The apple was small and not ripe so I only took a few bites, but I downed my entire salad.  A stop at the grocery store became a moment of weakness when I picked up a bag of Brookside Dark Chocolate Pomegranate and ate far too many.  Hopefully they are leaving our house today before I finish the bag!