Most of my weekend was spent focused around the gym. With my first competition coming this weekend, I wanted to make sure to get in back to back competitors workouts. These workouts are hard, but I love being surrounded by people who are giving their all, are constantly getting new PR’s, and motivate me to be better. After Friday’s letdown, I needed a little motivation before venturing into the unknown.

My morning nutrition both days consisted of a pre-WOD apple with almond butter, two waters, and post-WOD progenex, raisins, and a bar. 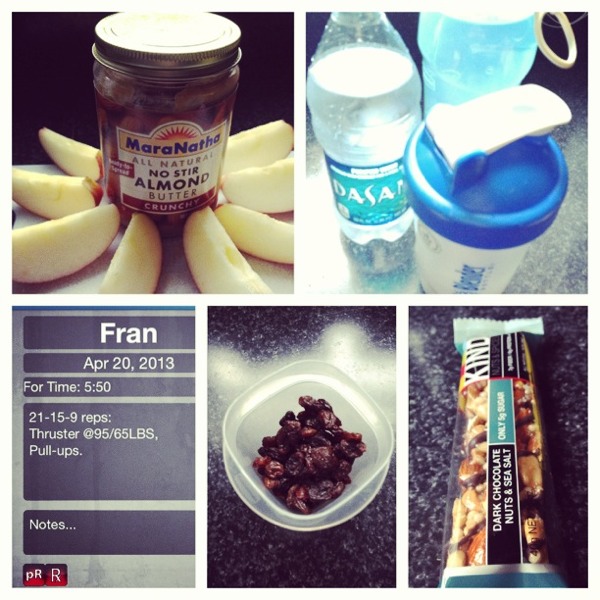 On Saturday we set up a snatch ladder with teams of 3, where the team had 50 seconds for each person to complete a snatch at the given weight and 10 seconds to rotate to the higher weight. If a team member failed a weight, they didn’t go on, even if other team members did. When this happened at regionals a few years ago the lowest weight was 105lbs. Unfortunately, there were a few of us who knew that was over our 1RM so they modified and started the girls at 85lbs. My previous 1RM was 75lbs (during Open WOD 13.1) and I had failed at 100lbs so I was curious to see my progress. I got the 85lb bar up, but really need to work on getting myself under the bar. I do more of a push press at the top than I should. The 95lb bar wasn’t so easy. At some point the bar was resting on my head (embarrassing form), but I was able to push it to lockout overhead so it counted. I wasn’t even close on the 105lb bar.

Luckily, I didn’t have much argument when I volunteered for Fran. My first Fran attempt was on New Years Even (we ended 2012 on a high note) and although I had hoped to do the pull-ups, I also wanted to use the Rx 65lb bar and knew that both weren’t going to happen. I ended up using a red band for the pull-ups and really struggled on the thrusters. I finished in 8:00 flat. I was excited to have the opportunity to complete my first Rx Fran, regardless of my time. Overall, it went well. I took more breaks in the pull-ups than I would have liked, but my hands were taped from my rips on Wednesday and the tape didn’t grip well on the bars. I didn’t do the thrusters unbroken so there is definitely room to improve, but I was incredibly proud of my time of 5:50. PR!

The rest of the day was spent running errands so I had a few eats on the go: Potbelly Farmhouse Salad (no cheese) and a shared bag of trail mix from Target. We had dinner out with my Dad (no photos) but I had some calamari, crab dip, a great piece of salmon and broccoli. I was actually craving a smoothie from Houston’s Central Market so I tried to create my own. I used 1/2 frozen banana, 1/2c frozen strawberries, apple juice, almond milk, and almond butter. It hit the spot 🙂

I started with the same pre-WOD meal: an apple with almond butter. This workout was a bit longer, but I still felt like I had enough energy to get me all the way through. * * Note to self for this weekend * * After a warm-up we started the first of a two-part team workout.

*Note: These are the womens Rx weights*

My teammate for the first part really made this go quickly for us! We finished in a respectable 9:40. I held the front rack position while he rowed the entire 750m. I was under the impression we had to clean the bar up so I only used 105#. I late found out that other people used the rack to Rx the weight … oh well. I started on burpees and completed about 25 while he had his weight overhead. I actually missed the 95# clean the first time, but managed to clean and jerk the 95# overhead so he could complete burpees. Once it was overhead, it wasn’t terrible, but I dropped it with 9 burpees to go so I finished those. We split the thrusters/dip hold pretty evenly and completed between 8-10 each time.

My team for the second part consisted of only three people so we only had to do 195 of each exercise. We split each exercise into small sets so we didn’t go into exhaustion: the pull-ups into groups of 10, the KB swings in groups of 20-25, the DU’s in 30-50, and the OH Squats in groups of 15-20. I didn’t help at all during the DU’s … I managed to get 3 on each attempt and the other girls were so quick at it that they just took care of them. That is definitely a skill I need to work on! 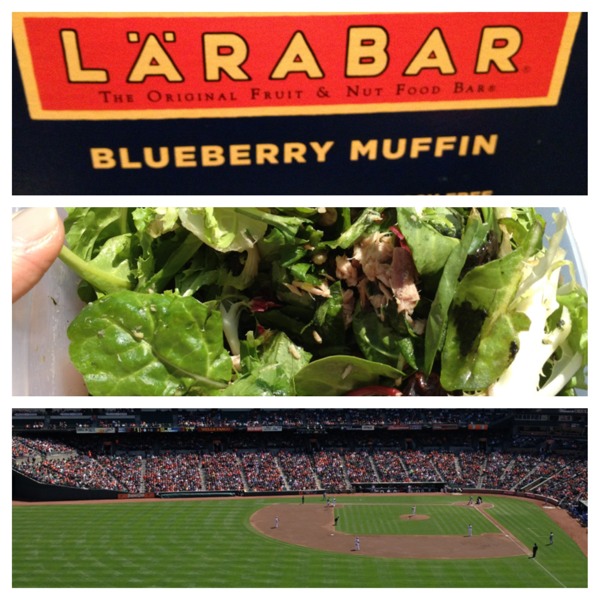 We were going to the baseball game so I packed a quick salad (mixed greens, tuna, almonds, and raisins) to take on the road. Stadium food is crazy expensive and everything is fried so I’d rather pack my own. After the game I warmed up with an unpictured Tall Americano from Starbucks. Dinner was quickly throw together: sausage, peppers, and onions in tomato sauce. I was feeling hungry so I made a mix of almonds and raisins to eat before an early bedtime.